Imagine sitting by a fire blazing in the cool night waiting for the steak to cook and you’re holding a glass of delicious red wine that warms the heart and tastes deliciously bold and strong. You may just be sipping on a lovely Cabernet Sauvignon. In the world of wine, Cabernet Sauvignon is one of the most widely recognized red grape varieties. It is one of the seven “noble” grape varieties which also include Pinot Noir, Merlot and Syrah. Noble grapes is a term which describes recognizable grapes that produce top quality wines all over the world. The noble grape varietals are also noted for the specific expression of the local terroir where they are grown. Cabernet Sauvignon definitely fits the bill!

In the winery, Cabernet Sauvignon is an easy and straightforward wine to make which makes it a kind of favorite wine of winemakers. After crushing, the mixture of juice and grape solids known as “must” is pumped into large fermenting vessels and either the native or added yeast begins the fermentation. As the mass of pulp and skins rises to the top of the fermenting wine, forming a cap, it is either punched down into the juice, or the juice is pumped back over the cap to extract the color and flavor from the skins.

After fermentation ceases, the pulp and skins are left to macerate for a period of time from a few days up to a month, depending on the style the winemaker is looking for. Typically, the wine is then pressed, and the clear wine is run off into oak barrels.
Cabernet Sauvignon loves oak and can withstand long periods of time in the barrels. The rich and robust profile of the grape are softened with oak and aging and the flavors of vanilla and spice complement the natural notes of blackberry, blackcurrant and tobacco that is so characteristic of the grape. In winemaking, the influence of oak on the overall wine structure can be managed with the use of different kinds of oak such as American or French. 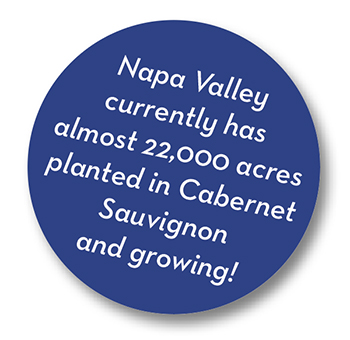 In the United States, if a label says Cabernet Sauvignon, at least 75% of the grapes used must be Cabernet Sauvignon. In recent years, a category called Meritage was created to account for wines which are blends of the five traditional Bordeaux varietals – Cabernet Sauvignon, Merlot, Cabernet Franc, Malbec and Petit Verdot – of which neither are above the 75% level. 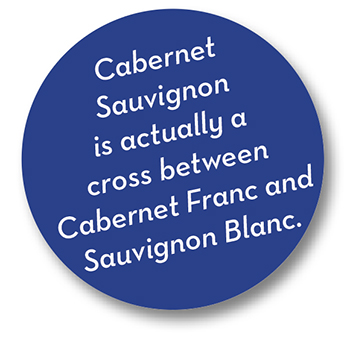 How to identify Cabernet in the glass

Cabernet Sauvignon is a wine of deeper hues of dark ruby purple when young and aging to a brick red over years in the cellar. The primary fruit aromas and flavors of Cabernet are mostly of the black fruit family and can include black currant, cassis, blackberry, black plum and black cherry. There are often secondary aromas and flavors of herbs, spices, green olives, mint, leather and tobacco. If grown in cooler climates, where it may not be as ripe when picked, there are usually vegetal, asparagus and green pepper notes that are likely to be present. The use of oak barrels will impart flavors of vanilla and smoke, as well as oak. With aging, the notes of cedar, leather, cigar box and earthy qualities are added to the mix. 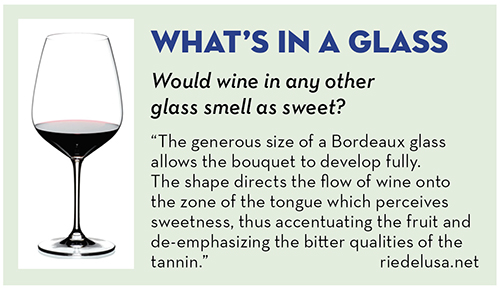 Cabernet Sauvignon possesses a great intensity and depth of flavor and it’s classic profile is rather full-bodied with high tannins and a strong acidity that contributes to the wine’s aging potential. The thick skins contribute to the tannic structure and young Cabernet can be rather harshly astringent or “tight” in the mouth. These tannins, however, also act as a preservative, helping the wine to age, and as it ages, the tannins soften. Many years ago, if a Cabernet was drinkable in its youth, it was dismissed as a bad wine. Modern winemaking techniques now produce wines that are supple enough to be enjoyed young, but can also age gracefully for many years. 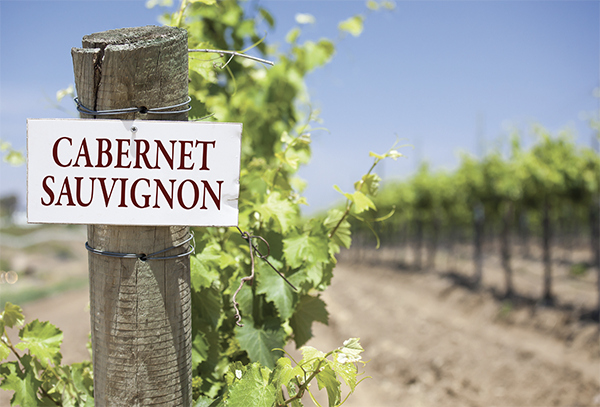 Get The Dirt – Understanding terroir and its influences

Cabernet Sauvignon is a natural cross of Cabernet Franc and Sauvignon Blanc that occurred by chance sometime in the 1600s in France and is grown in nearly every major wine producing country.
A big part of the global success of Cabernet Sauvignon is that it is a tough, hardy vine that consistently produces good quality fruit. The grapes are small with skins that are tough and thick with a deep bluish black color. The thickness and the toughness of the skin results in good resistance to vine diseases and help it to recover quickly in the event of late seasonal rains.
The vine does require a fairly long growing season, however, and generally any moderately warm, not too rainy climate, with well drained soils is best suited for the grape. In general, regions that are cooler have more potential for herbaceous notes and the infamous “green bell pepper” aroma that occurs from less than ideally ripened grapes. In regions where the grape is exposed to excess warmth and over-ripening, there is a propensity for the wine to have more “jammy” notes. 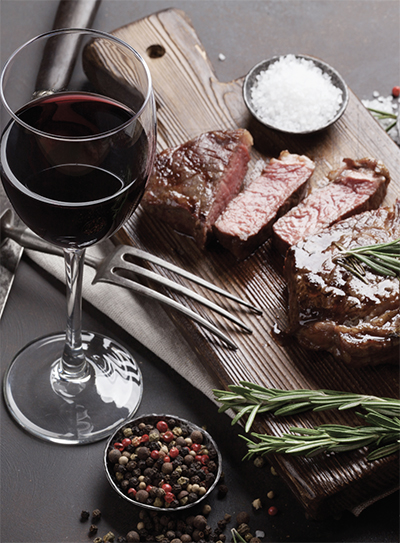 Cabernet tends to be the favorite accompaniment of fat-laced red meat and rich sauces. The quintessential pairing of Cabernet Sauvignon is with lamb. Perhaps there is a connection, after all to the sheep that gives presence to the Bordeaux town flag of Pauillac which is the home of Chateaux Latour, Lafite Rothschild, and Mouton Rothschild. With a roast leg, or with lamb chops, the flavor of Cabernet is ideal, and the tannins present in the wine serve to cut the fattiness, and refresh the palate. Sauces with garlic, red wine marinades, mustard, rosemary or other herbs will add flavor to the lamb and complement the wine deliciously.

The other optimal choice with Cabernet is beef served with a simple herb butter, or with a red wine sauce. Furthermore, the oak influences of Cabernet can be matched with similar cooking methods such as grilling or smoking. Complimentary oak-flavored spices like vanilla, dill weed, black pepper and brown sugar can also pair nicely.

The flavors of Cabernet, and especially its standard load of tannin do not go well with fish dishes, but there is a role for Cabernet with a whole roast chicken sauced with garlic, butter and herbs. Cabernet also goes well with with heartier English cheeses like Cheddar, Wensleydale, Cheshire or Gloucester.

This vegetarian dish is a nod to the classic Beef Wellington. A more deconstructed version, this dish is simple to put together and has enough umami to stand up to Cabernet and provide satisfaction without any meat required.
From Sequoia Grove Winery – pairs well with an aged Cabernet Sauvignon
Be sure to tag your prepared recipe:  @sequoiagrove on instagram and hashtag it #winefoodfriends 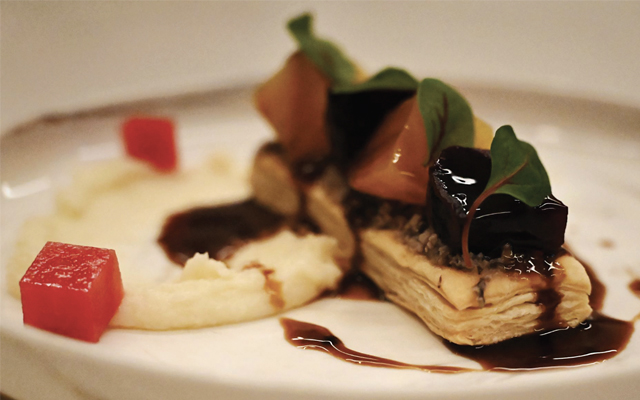 For the Roasted Beets:

For the Mushroom Duxelles

1.    Heat butter in a skillet over medium-high heat.
2.    After butter melts, add shallots and garlic and sauté for 3 minutes.
3.    Add Mushrooms, salt, pepper, and herbs.
4.    Reduce the heat to medium or medium-low and simmer until all liquids have evaporated. Unlike a typical mushroom sauté, this will take a little longer (10 to 12 minutes). Also try to avoid browning the mushrooms.
5.    Add wine and cook until evaporated, usually around 4 or
5 minutes.
6.    Finish with cream.

For the Chevre Whipped Potatoes

1.    Place potatoes in a large saucepan, cover with cold water and add 1 Tbsp salt.
2.    Bring to a boil and cook until the potatoes are tender, about 10 minutes.
3.    Drain and return the potatoes to the pan.
4.    Shake the pan over low heat to dry the potatoes slightly.
5.    Remove the pan from the heat.
6.    Mash the potatoes with a potato masher, ricer or food mill.
7.    Stir in goat cheese and enough hot milk to make a smooth puree.
8.    Season with salt and pepper.

1.    Spoon the potatoes onto plates.
2.    Spread duxelles on the puff pastry and top with beets.
2.    Place over the potatoes and serve drizzled with your favorite demi-glace.

Sequoia Grove’s A Taste For Cabernet Wine & Food Experience opens new horizons for pairing food with Cabernet Sauvignon. Forget all of the “rules” you were taught about pairing food with wine and be guided on a wine and food odyssey by welcoming hosts and Winery Chef Britny Maureze. Savor Single-Vineyard and Reserve wines with unconventional food pairings designed to showcase how Cabernet Sauvignon works well with across many cuisines.