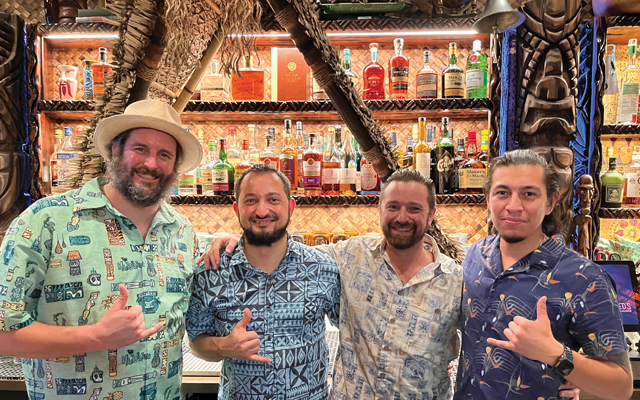 “We’ve created a gathering place that’s completely different from anything in Napa Valley,” said owner Nat Komes, General Manager of Flora Springs Winery and Proprietor of Jon Nathaniel Wines and Bodacious Wines. “I had my eye on this building for a few years and I’m proud how my dad, John Komes, and I transformed it into a place with layers of fun and surprise. We made improvements to the exterior to add appeal and align the building more closely with downtown Napa and created an interior that transports people to a completely different place.”
Over a year in development, Wilfred’s Lounge pays homage to Komes’ Hawaiian heritage through his Grandmother Flora, who was born and raised in Honolulu. Wilfred’s is named after Flora’s brother, who many moons ago welcomed guests to his bar in Honolulu.
Before even entering Wilfred’s Lounge, guests are greeted with a colorful 14'x40' exterior mural by artist Ken Ruzic. Working closely with the Komes family, Ruzic created a stylized illustration of Flora Komes arriving in Napa Valley from her native Hawaii at the bow of an outrigger. Those with a keen eye might recognize Napa’s old First Street Bridge, and the mural, painted on maple panels, contains numerous references to both Napa Valley and Island culture. 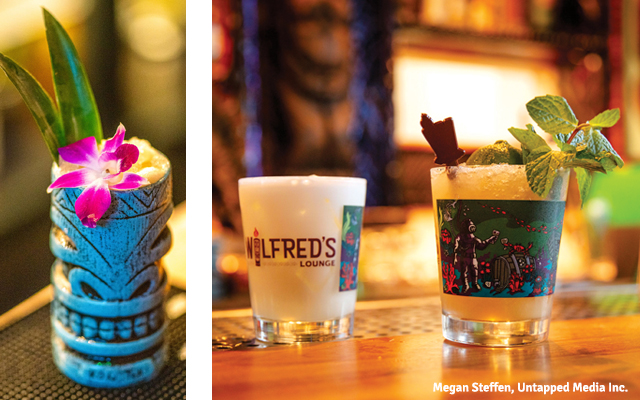 For Wilfred’s cocktails, Nat Komes collaborated with Tiki mixologist Daniel “Doc” Parks, a 2017 San Francisco Chronicle “Bar Star” who was beverage director at the world-renowned Pagan Idol and Zombie Village bars in San Francisco. Parks, an alumni of Trader Vic’s flagship restaurant in Emeryville, has been named General Manager of Wilfred’s Lounge. Executive Chef Max Ackerman, formerly of Compline Restaurant, will oversee the menu of small and big plates. Ackerman, who rose through the ranks from line cook to Chef de Cuisine at restaurants throughout California, promises to bring fun, creative ideas to traditional techniques for Wilfred’s Island-inspired menu. 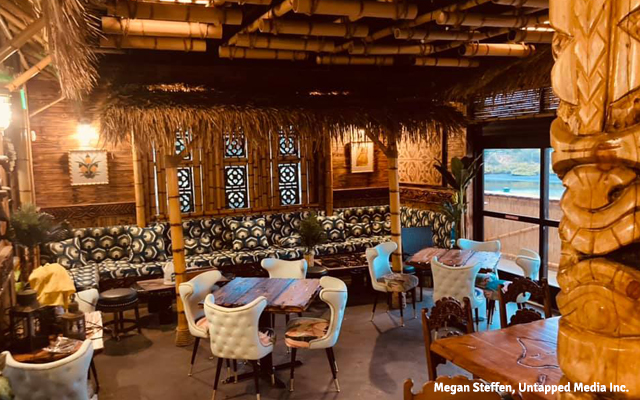 With two stories, floor to ceiling windows and epic rooftop views of the Napa River, Wilfred’s Lounge is filled with authentic Tiki carvings, installations and art pieces created by a group of highly regarded artists, designers and carvers. Numerous professionals and artists who specialize in Tiki culture were commissioned to create custom pieces for Wilfred’s, including Bamboo Ben Bassham, Michael Cobb and Billy Crud, as well as Bill Collins, Chris Lopes, Woody Miller, Jose Mendez and Ken Pleasant. Among the many items they’ve created for Wilfred’s are interior “tapa” walls carved out of wood, a bamboo-wrapped bar and custom back bar, bamboo huts, an outrigger, an “ohana” case for storing regulars’ mugs and numerous Tiki carvings.
Nat Komes has also selected family heirlooms to display, including his grandmother Flora’s trunk that she brought with her to San Francisco from her home in Hawaii in 1929. Commissioned portraits of Flora Komes and her brother, Wilfred, were painted by artist Steven Horlock. 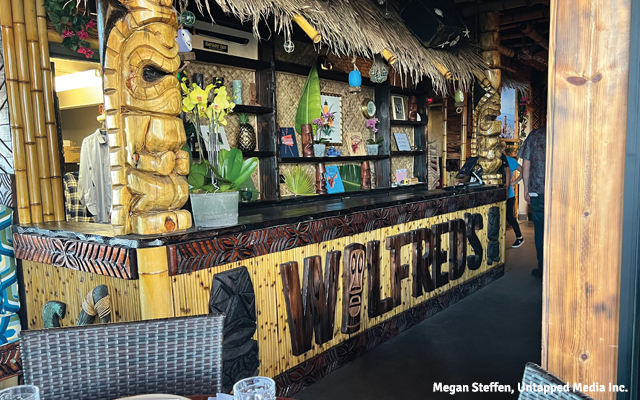 Wilfred’s Lounge is open five days a week, Wednesday-Sunday, from 11 a.m. to 11 p.m. (kitchen closes at 9 p.m.). Reservations are not required but can be made by calling (707) 690-9957. Wilfred’s menu includes Island-inspired small and large plates, traditional and creative Tiki cocktails, a full bar as well as wine and beer.