Think back to San Francisco, in the Haight-Ashbury neighborhood in the ’60s. Famous singers, hippies, long hair and bell-bottoms. This was where Phil Coturri, owner of Enterprise Vineyards and Winery Sixteen 600, grew up until his parents bought a four-acre property in a small town called Glen Ellen. Part of their motivation was to keep Phil and his brother out of trouble. Depending on who you ask that was not necessarily effective. What happened certainly was the return to the winemaking and agriculture roots that can be traced back to Enrico Coturri. Before San Francisco, Enrico arrived at Ellis Island from Italy in 1905. He had $9 in his pocket and his stated occupation was a grape grower. Three generations later, the Coturri family are still grape growers and are integral to the history of Sonoma. 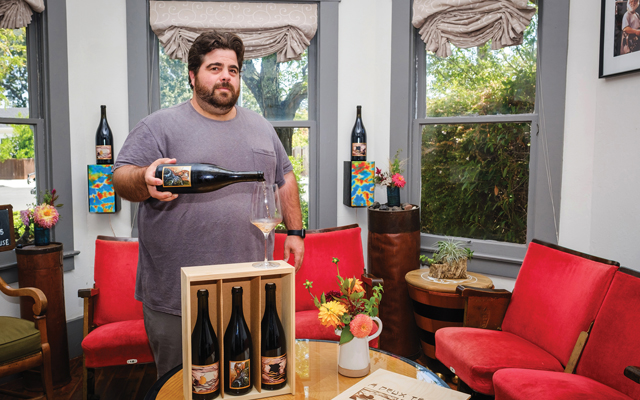 The Beginning of Organic Farming

If you ask Phil, he claims he was working at the vineyard in Glen Ellen by 13 years old in 1965. That vineyard is the now famous Laurel Glen, which is still farmed by the Coturri family today. As a teenager, Phil remembers spraying Paraquat, a now illegal herbicide, and having a sore throat for weeks after. That same property on Sonoma Mountain had a neighbor, a retired Army Colonel, who gave Phil an entire crate of his old Organic Gardening magazines. Soon after, Phil started composting and farming an organic vegetable garden on the same property that he was still spraying the herbicides.

Fourteen years later, Phil set out on his own and created a vineyard management company, Enterprise Vineyards. He started redeveloping a vineyard on Sonoma Mountain, what is now named Dos Limones. The family living on the vineyard challenged Phil to farm without the use of harmful herbicides, since their kids were growing up playing in between the vines. When you tell the story now, we all nod our heads in understanding, but at the time it was far-out thinking. He took the principles of the small vegetable garden and applied them to a much larger 15-acre project. Unknowingly, Phil became the pioneer of organic farming in Sonoma.

What Phil and others in the last 20 years have realized, is when you remove chemical shortcuts, what you replace them with is labor and people. You have more attention to detail and more eyes on individual vines. Fine tuning and perfecting every vine as an individual within a larger frame of the vineyard. As a result you have better tasting fruit, which leads to better tasting wine. Today, Winery Sixteen 600 continues to practice building and contributing to healthy ecosystems in and around the vineyards. “We do not take more out of the vineyard than what we put in. The vines will last longer, the vineyard is healthier and the wine tastes better,” says Sam Coturri, Phil’s son.

Phil fell in love with the Grenache-based wines of Châteauneuf-du-Pape, France and decided to pay a visit in the late ’90s. During his trip, he saw how similar it was to Sonoma. It is warm, rocky, windy and had some marine and coastal influences, all aspects that Sonoma benefits from as well. This all culminated with wanting to plant, grow and drink more Grenache. It was then an elegant collaboration project with Philippe Combie and his protege Isabel Gassier began. Philippe was known as the consultant to the gods of the Rhône world. He visited the vineyards and decided he wanted to grow Grenache with Phil and Winery Sixteen 600. Isabel was already working with the family at Enterprise Vineyards at that time. She learned Philippe’s protocols for fermenting and aging Grenache and continues to work with Winery Sixteen 600 as well as her family’s estate in France.

“If there is a thesis to Winery Sixteen 600 it is that Rhône varieties and Grenache in particular express the terroir here in a beautiful, unique way and are part of our climate change mitigation plan,” Sam continued. The 2022 harvest was a perfect example of this. With a week of triple degree temperatures then rain a week later, a lot of other grapes suffered in those conditions. For Grenache, it was one of the best years ever. It may not have been a large crop, but it is some of the most elegant.
“This is something we have been talking about for a long time. Being hippies and environmentalists, the conversation about global warming and climate change started in the ’80s. Before Al Gore made it cool, or hot I guess,” Sam said.

The back-to-the-land movement in the ’60s, started with the rock & roll hippies in the Haight-Ashbury  neighborhood in San Francisco and later grew into organic farming. Phil grew up surrounded by these movements and they became an essential and unique part of his story.

Phil and his wife developed a close connection with rock & roll, specifically the Grateful Dead. Stanley Mouse, who created most of their album covers, posters, etc. also created Winery Sixteen 600’s wine labels and art. The Grateful Dead’s publicist and his wife even became his son’ godparents.

When you walk into the turn-of-the-century home, converted into a tasting room for Winery Sixteen 600, you can feel the history and culture. There are turn tables and several hundred vinyl records to choose from while you taste. Their iconic tie-dye shirts to purchase and stunning original Stanley Mouse art along the walls.

While seated for a tasting you may see Phil, the man and legend, driving a big truck with his ATV in the back, ever the farmer. His son Sam can be found in the tasting room or driving to visit a vineyard. While on his way to check on the vineyards he will typically be listening to live recordings of wherever the Grateful Dead played that day in history. “If I am playing anything for the Grenache, it is most likely that,” says Sam. The Coturri family is spreading the love, one bottle and one record at a time.